Microsoft Github isn’t about social coding anymore: it is all for social conditioning now.

Yesterday Microsoft made another clear-cut action of posturing and virtue-signaling (much like their decision of not to sell certain technology to police departments). This time around they declared war on English language and made it clear to everybody that they are in a position to decide the meaning of the words for the rest of us. In particular, for the software development communities. Yes, I am talking about the contraversial and illogical step to remove common term “master” from their popular version control system Github.

Today, after almost ten years of being a customer, I have deleted my Github account and completely moved elsewhere. If you’re thinking about doing the same you can find ample alternatives from bitbucket.org to jetbrains.space with many options in between.

Replacing words in programming languages or changing their meaning has nothing to with social justice or better world. It is how big tech companies are flexing their muscles and exercise their control over software development crowd.

Submission or outright genocide through commercial meanings is what Microsoft was doing to Free Software and later Open-Source Software for years. This is what Microsoft keeps doing no matter how many times their management will say “we embraced open-source” or “we admit our mistakes in the past” – they still have the same agenda and they still do everything they can to submit open-source development to their command. Massive contributions into Linux Foundation and Apache Software Foundation are just that: a tactical moves to setup people who would be doing their bidding for them.

Perhaps open-source developers and other software professionals would hear this and hit Microsoft back exactly where it hurts: their P&L, user base and influence they should no longer have.

Check this out, guys – you simple can’t make up stuff like that.

This what you’ll see if you trying to install Wine compatibility layer on Linux (Ubuntu 12.04 in my case) 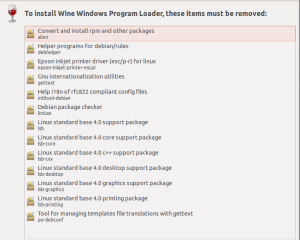 Oh, and you see this finger, Bill “small-&-soft” Gates, right?